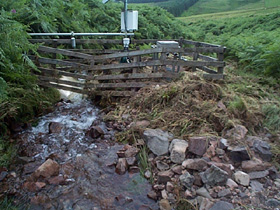 A series of short, sharp rainfall events were dramatically recorded by the Institute's environmental monitoring site at Sourhope. Rainfall during the last couple of weeks culminated in a particularly heavy and prolonged down pour during Friday 17th and the early hours of Saturday 18th July. The weather station record, illustrated below, shows that 126mm of rain fell in around 28 hours.

The result was a deluge of water down the usually benign burn and a substantial amount of material washed into the gauging station. "We are still digging to uncover the entrance to the stilling well", said Gordon Common, site caretaker. "We haven’t yet recovered the data but hope that the sonic depth sensor is unharmed and that we will have a complete record of the event".

Down the valley, the approach road to Sourhope has been washed out and the repair work, only just completed after last years flood, has unfortunately suffered significant damage.

Published on 13 August 2009 in Climate, water and energy