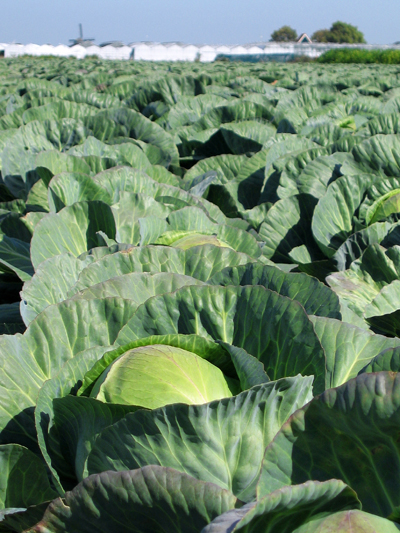 This research collaboration will assess the impact of plant defence elicitors – compounds that induce a natural defence response – on brassica and allium crops such as cabbages, Brussels sprouts and onions. The results will be of interest not only to large commercial growers but also to vegetable growers in gardens and allotments across the country who are looking for organic ways to keep diseases at bay.

The two year project funded by the Horticultural Development Council aims to determine whether elicitors can be used effectively on a range of horticultural crops.

“This is what the growers want,” Prof Dale Walters of SRUC’s Crop Protection Team, says. “Brassicas in particular are an important crop and Brussels sprouts often suffer from light leaf spot, for which there is currently no adequate control method, chemical or otherwise. It is a similarly desperate situation with head rot in broccoli and other bacterial diseases which affect brassicas and alliums.”

Both light leaf spot and head rot will reduce yield, including marketable yield, because they can reduce crop growth, but also because they cause unsightly blemishes and spots on sprouts and on broccoli heads.

Prof Adrian Newton, cereal pathologist at the James Hutton Institute, says: “Resistance elicitors offer great potential for reducing disease in integrated management systems and reducing the use of conventional pesticides at the same time. They do not replace conventional pesticides; they complement them whilst enhancing the plant’s own ability to defend itself. We are using knowledge from our fundamental molecular studies of plant defence mechanisms and applying them to practical problems that growers are having trying to control diseases. In this partnership with SRUC and HDC we will be able to tackle the problems of translating research into practical application on growers’ crops. This is exciting and very timely work, as many of our conventional pesticides are being removed from the market.”

Even when control measures are available these cannot always be relied upon. Growers are heavily dependent both on fungicides and resistant varieties when it comes to crop protection. Fungicides however, not only concern many due to their chemical content, but pathogens often develop a resistance to them. Microorganisms have the ability to mutate, and far quicker than larger organisms; this means they can break down a resistant variety in just a few years.

Due to these challenges the clamour for alternative, safe, control measures has been growing louder.

“Plants have always had their own complex defence mechanisms which, over time, have, in a way, switched off. However, these traits are still there. By activating the correct pathways in the plants we can awaken a broad range of natural plant defences.” Dale explains. “The mechanisms can include strengthening cell walls, putting up physical barriers to the invading organism, or releasing toxic chemicals which damage and kill the invader.”

SRUC will be out carrying out Brussels sprout trials with local growers testing five or six different elicitors on three varieties. They won’t just be looking at what works best but how they work in combination with fungicides and how and when they should be applied to ensure optimum disease control.

The James Hutton Institute is carrying out all the work on Burkholderia-mediated soft rot in onions, bacterial head rot in broccoli, Pseudomonas on radish and Xanthomonas on cabbage with the same objectives.

Published on 27 May 2013 in Food, health and wellbeing