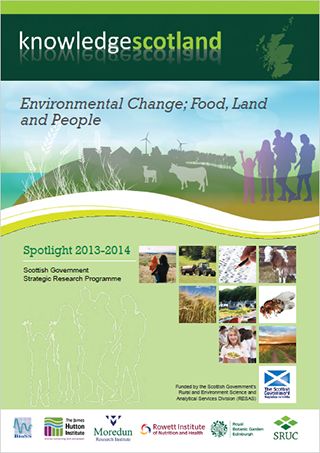 Published on 24 March 2011 in Sustainability and Communities, Climate, water and energy, Ecosystems and biodiversity, Food, health and wellbeing

The Scottish Government's Minister for the Environment and Climate Change, Roseanna Cunningham MSP, has praised the work of the Scottish research institutes. Read more

Published on 25 February 2011 in Climate, water and energy

Three new booklets have been produced by the Macaulay Land Use Research Institute to summarise some of the key findings and research outputs from the Scottish Government's Environment - Land Use and Rural Stewardship research programme. Read more

Published on 17 February 2011 in Ecosystems and biodiversity

Following the successful pilot scheme , organised by the Moredun Research Institute, 13 more scientists from the Institutions providing research to the Scottish Government will experience the working life of their policy colleagues at first hand . Read more

Published on 14 January 2011 in Sustainability and Communities, Climate, water and energy, Ecosystems and biodiversity, Food, health and wellbeing

"Nature", the journal, gets into the science/policy debate!

Published on 13 January 2011 in Sustainability and Communities, Climate, water and energy, Ecosystems and biodiversity, Food, health and wellbeing

Scots scientists use gene profiling to improve our berries

Published on 04 January 2011 Sustainability and Communities , Food, health and wellbeing

Research at the Royal Botanic Garden Edinburgh (RBGE) indicates that threatened species in the remaining fragments of Scotland's own rainforest, along the country's west coast, could benefit from small shifts in policy on forestry. Read more

Published on 02 January 2011 Ecosystems and biodiversity

Hardy souls participating in the New Year 'Loony Dook' can be reassured about the quality of the water, even if the temperature causes concern, research has shown. Read more

DNA fingerprinting comes to the aid of the Hogmanay dram

Work done by crop scientists at SCRI, Scotland's world-leading research institute based at Invergowrie near Dundee, could help the whisky industry to remain as one of the top Scottish exports. Read more

Published on 29 December 2010 Sustainability and Communities